Why are the sections of the fence around my garden (in Vancouver BC) made of BC cedar in Asia – i.e. the cedar was shipped twice across the Pacific? Cedar fencing is hardly a high-value product.

The first is handled in the usual way with a shape- and Re-dependent drag coefficient. Note that by convention the wetted area is used rather than the frontal (projected) area or wing area (for aircraft).

The second depends on a dimensionless quantity, the Froude Number $Fr$ which in turn depends on the ship’s length $l$, velocity $v$ and the acceleration due to gravity $g$ (Eqn.1)[1] Richard Fitzpatrick’s fluid mechanics pages, http://farside.ph.utexas.edu/teaching/336L/Fluidhtml/node151.html [2019-09-18].:

The complicated way that the wave drag depends on $Fr$ is shown in Fig.1.

The wave drag D (shown on an arbitrary scale) depends critically on the Froude Number Fr.

It is generally hard for a ship to get past the big spike, which occurs when the waves from the bow and stern interfere constructively and large power is pumped into the wake. The velocity of peak drag is called the hull speed, vc = 0.56(gl)1/2 which determines how fast a ship can move. The bigger the boat, the faster it can go. 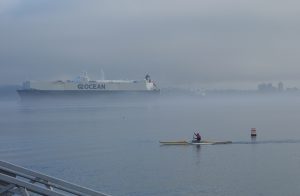