How much energy does it take to move a person or a tonne of freight from A to B?

The amount of energy required to get from A to B is equal to whatever force is required to push the object in the direction it is going in, multiplied by the distance travelled, i.e. the mechanical work done. How much force do you need? If you are moving at a constant speed, then the only reason a force is needed is to overcome friction or drag[1] Cars versus bicycles /article/energy-use-cars-6-gasoline-cars-vs-bicycles. For travelling on land or water, physics puts no constraints on how small this force can be. For flight, physics imposes fairly strict limitations on how low the transport cost can be (because one has to move fast to stay aloft). However, when the transport cost is expressed in appropriate units, remarkable similarities can be seen in very different modes of locomotion.

When dealing with generalities, the most useful units for the expression of transport costs are something like:

Distance is usually given in km

Mass, in kg or tonnes, can refer to that of the entire vehicle or only that of the useful load. Or, it can be a single passenger or 100 passengers [2]D. MacKay, Without hot air, p.121 http://www.withouthotair.com.

If you want to make an educated guess about what the energy cost of transport should be, consider a dimensional analysis approach:

So transport cost has the same dimensions as acceleration. What is the most relevant acceleration when considering moving stuff from A to B? The acceleration due to gravity, g, is the most likely culprit. If g were equal to 0, you could push ten-tonne loads around with your little finger, albeit rather slowly.

The acceleration due to gravity in energy units is 9.8 J/(kg·m) or 9.8 MJ/(tonne·km). This would be the energy cost of lifting an object vertically, or of sliding it along the floor if the coefficient of kinetic friction, μ k = 1. Of course, we can do better than this, as we have wheels and wings. However, the efficiency of our engines,  the ratio of mechanical work done to chemical energy in the fuel burnt to do it, is never much bigger than about 30 or 40%, and this works against us. Hence the energy cost of most forms of transport is somewhere between 3 and 6 times better than our dimensional estimate, as can be seen from table 1.

(a) Walking is a rather inefficient means of getting from A to B, as you cannot “free-wheel” or “glide.” Note how much more costly walking is compared to cycling.

(b) When walking slowly, about half of your power output is simply going into keeping your body functioning and warm.

(c) Comparing by the tonne is misleading: a 400-tonne 747 carries about 400 people, so it takes a tonne of 747 to lift and move one person; when walking, the “vehicle” and the “passenger” are, of course, one and the same. Put another way, the ratio of vehicle+fuel mass to cargo mass (passengers plus luggage) is about 10:1 for a 747 and 1:1 for walking.

Why is human-powered cycling three times as costly, energy-wise, as an electric bike?

Here we are comparing food energy input to electrical energy input. The former has a mechanical efficiency of 20-30%. The mechanical efficiency of an electric motor is much higher. If the electricity used to charge the batteries comes from a thermal power station, and we use the total chemical energy input instead of the electrical, the electric bike would look worse than the human-powered one (due to transmission and charging losses). On the other hand, if we considered the energy used to produce the food the human ingested, it gets complicated.

While MJ/tonne/km makes sense physically, MJ/km/(100 passengers) is a more meaningful unit economically (and environmentally); table 2 presents the data in these terms.

This makes much more sense intuitively. Now the most interesting comparison is between a fully-laden 747 and a Honda Civic; the energy cost is the same for a plane as for the Civic with one and a half occupants, although the plane is moving at 10 times the speed. How come? Simply put, the 747 has no rolling resistance, is a much more aerodynamic shape, of necessity, and doesn’t stop at traffic lights. In both cases, it takes about a tonne of vehicle to move one person. A 60%-full 747 (200 passengers) needs almost the same amount of energy to get it from A to B as a full one, because the passengers account for such a small fraction of its total mass, so the energy required per 100 passengers per km is about 1/0.6 ≈ 1.7 times as much as for the full aircraft. The average load factor (ratio of filled seats to available seats) for US scheduled airlines is about 60%[18]US Bureau of Transportation Statistics http://www.bts.gov/xml/air_traffic/src/index.xml (link is broken).

Notice how surprisingly bad sea travel is; this is mostly because it takes a very large mass of boat to float one passenger (5 tonnes for a BC Ferry[19]BC Ferries fleet http://www.bcferries.com/about/fleet/, 40 tonnes for the QE2 cruiseliner[20]RMS Queen Elizabeth II http://en.wikipedia.org/wiki/RMS_Queen_Elizabeth_2) or one tonne of freight.

The bicycle remains unbeatable for short journeys. Trams are best for journeys of intermediate length, high-speed rail for longer ones; for low rolling resistance, you cannot do better than steel on steel[21] Rolling resistance /article/energy-use-cars-3-rolling-resistance. In the absence of public transport, pile as many people as you can into a Honda Civic.

But note: the best way to reduce the cost (environmental and economic) of travel is not to go. 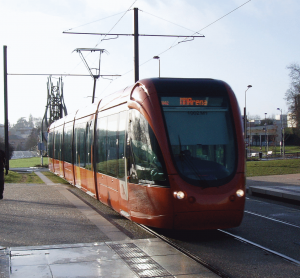