Bats and the Doppler Shift

What compensation for Doppler shifts do bats perform to keep their echoes within their hearing range?

Bats perform echolocation by sending out cries and gathering information about their surroundings based on the echoes that return back to them. The incoming direction of the echoes helps determine where things are located. The time it takes for the echoes to return relates to how far various objects are away. By the intensity of the returning signal they can tell information about the size of the objects and distance as well[1]Tuszynski, Dixon, “Biomedical Applications of Introductory physics”, p. 201, John Wiley & Sons, Inc. (2002).,[2]Ahlborn, “Zoological Physics”, p. 355-356, Springer (2004)..

When bats are flying they experience a Doppler-shift in the frequency of the cries they initially sent out compared to the frequency of echoes that returns to them. Horseshoe bats change the frequency of their cries to keep the returning echoes centered within a narrow frequency range where they have very sensitive hearing. This is called Doppler-shift compensation and allows them to hear the beating wings of insects as slight deviations of frequency within their most sensitive hearing range[3]Thomas, Moss, Vater (Ed.), “Echolocation in Bats and Dolphins”, p.17, The University of Chicago Press. (2004).

If the bat is moving at $v_b = 6\text{ m/s}$ we can calculate what frequency they have to cry at so that the echoes they hear are at $76.5\text{ kHz}$ (where they are most sensitive in their hearing).

Most of the echoes the bats hear are from trees and its surroundings which are stationary.

In determining the frequency that the bat hears returning back to him two Doppler shifts take place[4]Knight, Jones, Field, “College Physics: a strategic approach”, 1st edition, p. 636-637, Pearson Addison-Wesley (2007). First the bat is a moving source of frequency $f_0$, and the speed of sound in air is $v = 343\text{ m/s}$, so that the frequency that hits a stationary object is given by Eqn.1.

The bat is then an observer moving toward the stationary object that acts like a source of $f^\prime$.

Compensating for two Doppler shifts, Horseshoe bats change their cry so that the returning echoes they hear are in their sensitive range. A calculation with representative numbers gives what frequency they would have to cry at to hear echoes from stationary objects within their sensitive hearing range. 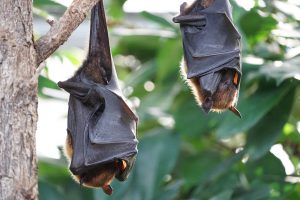